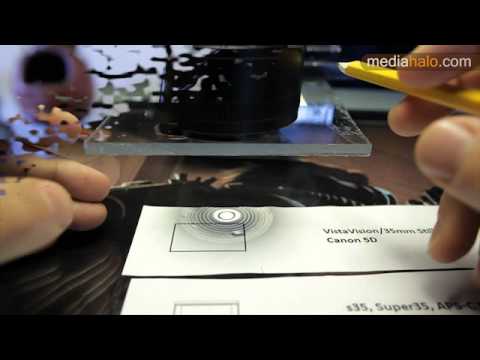 The first thing to understand is that lenses are built to project a certain size image circle, a full frame lens, also known as a 35mm, projects a 35mm size image circle. Then we have cropped sensor lenses, which are referred to as digital only, or digi, or whatever horrid marketing terms they chose, and basically they are built to project a smaller image circle, because the cameras they are intended for have the smaller sized ‘cropped’ sensors.

Likewise a 4/3rds sensor camera has 4/3rds lenses, and 16mm and 2/3″ sensor sized cameras have lenses with 16mm sized image circles. You can usually put a larger format lens on a smaller format camera, but it won’t see as much of the image circle, which is what we call a crop factor. you cannot go the other way, because then you will get a peep hole effect, vignetting to the extreme.

And now for our first debunk, because every time i hear someone talking about dslr video they say, well, the 5d has the amazing shallow depth of field, and it’s because of it’s huge sensor. Now granted, i’m sure not everyone out there thinks that sensors create DOF, but we’ll clarify it for those who may not know: consider this demonstration, you can put a 35mm type lens on either a 35mm full frame camera, or on a smaller sensor body, but that sensor is going to ‘crop’ that larger image circle, so we’re going to see a narrower FOV. So imagine this same lens on either camer, one with the larger sensor, one with the smaller.

So where did the dof change? Here’s a clue, it didn’t. the sensor has nothing to do with DOF, it is physically impossible for the sensor the create or manipulate DOF, it simply captures the light being projected onto it. DOF is created in the lens.

Try this out for yourself: Take two different photos of the same scene, place an object or person out in front of a background. Use a 50mm focal length. Then take the second shot by moving the camera back far enough so that you need a 100mm focal length to maintain the same field of view of that object/person. Change no other settings, especially keep the aperture the same.

You’re probably now looking at the two photos and calling me an idiot, because of coarse you’re seeing much more background blur in the 100mm shot. Actually… you’re not. What you’re seeing is the exact same amount of blur.

The reason the DOF stays the same is because you didn’t just use a longer focal length, you also changed the focus distance, there is an inverse relationship between the focal length and the distance of the focus subject, what you are actually doing by pulling back is simply magnifying the background bokeh, and anytime you magnify an object, you see more detail, and in this case you see more blurry detail. To your credit, it is achieving what you were out to get, a blurrier background, but when going about it or showing someone how to do it, be sure to not pass along misinformation by saying your creating a shallower depth of field. Your actors have exactly the same amount of space to move in.

Lastly, I want to put something in it’s place: Full frame sensors will not make you famous. See because ever since the 5D2 came out, people have been clamoring over the Full Frame “look”, and I hear far too often about how smaller sensors are garbage. Well those who say such things are children, children who need to learn…

The good old 16mm sized 2/3″ sensor. Which, was the first sized sensor to be used as the A camera on a hollywood production, which was star wars episode 2 shot on the f900. So riddle me this filmmaker, you’re saying that you need a FF, when your ultimate competitor is doing just fine with a fraction of that size… i call BS. Case in point, nearly any modern sensor size over 1/2″ (EX1) will give you a great image.